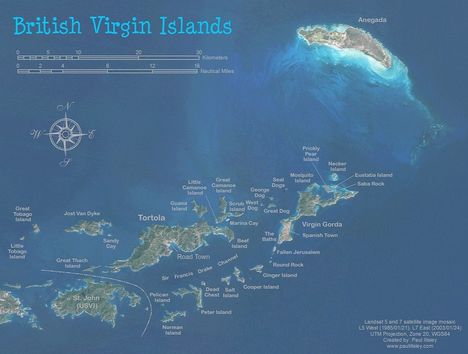 Anegada
This island is characterized by its nearly flat elevation, striking coral reefs, secluded sandy beaches and clear springs that bubble from its coral beds.

Bellamy Cay and Trellis Bay
Trellis Bay is a wonderful anchorage that offers an ample mooring field and plenty to do ashore.  In the center of the bay there is a small island, Bellamy Cay - home to a single restaurant called the Last Resort.
Cooper Island is a very popular anchorage with beautiful snorkeling right off the beach.
On shore, the Cooper Island Beach Club has a great happy hour atmosphere, and the restaurant offers an extensive menu to choose from.

Marina Cay
Marina Cay is a tiny island, protected not only by its sizeable reef (which is brilliant for snorkeling), but also by its close proximity to Beef Island, Great and Little Camanoe, and Scrub Island. The swimming and snorkeling around the island is superb, and the island’s dive shop has an array of water sports equipment to rent and enjoy.

Norman Island
Norman Island has for years been acclaimed as the island around which Robert Louis Stevenson’s ‘Treasure Island’ was based. Snorkeling is beautiful along the shoreline but for a greater adventure dinghy around to The Caves. Legend has it that these geological phenomenon house the lost treasure of some of the territory’s more famous pirates. The area is a National Park, and the abundance of fish life is astonishing considering the site’s popularity.
A little further afield, but a great stop-off point on your way to this anchorage is The Indians, a series of rock pinnacles protruding from the ocean bed which house some of the area’s prettiest coral and fish life.

Tortola
Cane Garden Bay
Tortola is home to Cane Garden Bay, Soper's Hole and Road Harbour to name a few. Soper’s Hole, a cove nestled in the lee of Frenchman’s Cay, is renowned for its colorful architecture and Caribbean ambience, not to mention the role it played in days when the territory was dominated by pirates!

The Baths
Considered by many who have visited the area as the Eighth Wonder of the World, this is a geological phenomenon unmatched anywhere. Gigantic granite boulders look as if they have been dropped haphazardly from the sky, creating a playground for visitors to walk over (and in some areas, crawl through!).

North Sound
Accessible only by boat, North Sound is a popular overnight anchorage with a number of venues in which to spend a fun afternoon or evening. Arrive at this spot early enough in the day, and the children can enjoy renting sunfish dinghies to explore the area, or watersports lessons.